'Boss' case the rule not the exception 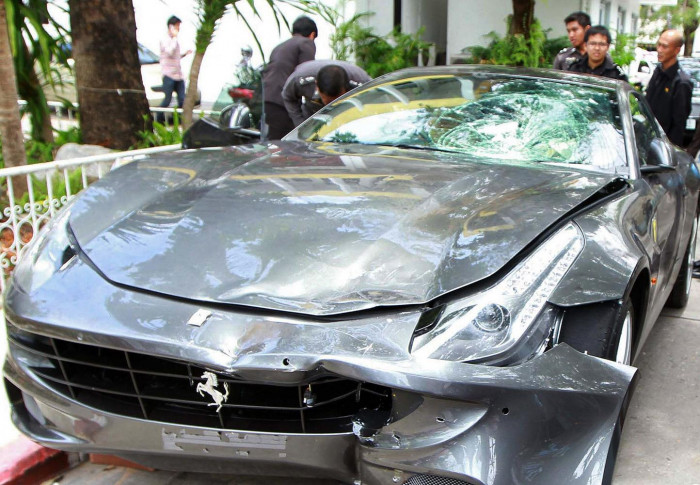 'Boss' case the rule not the exception

Sooner rather than later, we will witness two major state agencies pointing the finger at each other over the infamous hit-and-run case involving Vorayuth "Boss" Yoovidhya, the Red Bull scion. The two agencies are none other than the Royal Thai Police and the Office of Attorney-General (OAG)...

Rights activists have claimed they have evidence to prove that Mr. Vorayuth the Red Bull heir had illicit chemical substances, including cocaine, in his system during his Sept 3, 2012, fatal hit-and-run.

According to the Bangkok Post, all three referred to what looked like copy of a letter by Vichan Peonim, head of the Forensic Pathology programme at Mahidol University’s Faculty of Medicine at Ramathibodi Hospital, made to the head of the faculty’s Department of Pathology in Thailand.


The letter, dated Oct 1, 2012, was “about the substances found in the body of Mr Vorayuth Yoovidhya as requested by the Thong Lor Police Station”. The letter showed that Mr Vorayuth’s body contained Alprazolam, Benzoylecgonine, Cocaethylene and caffeine.

Alprazolam, commonly sold under the brand name Xanax, is used to manage anxiety disorders. The drug is classified as a Type 4 stimulant, and it is highly regulated in the kingdom, the letter said. Alprazolam residues can normally be detected in urine from one to five days after the drug is consumed, it said.

It said Benzoylecgonine is the main metabolite found in cocaine, which can still be detected in blood for as long as 28 hours after ingestion. Cocaethylene is a substance formed when cocaine is mixed with alcohol, it added.

Red Bull Brand Distances itself from Thai Heir
Thai energy drink brand Red Bull is now distancing itself from the founder’s grandson. Because he was involved in a fatal hit-and-run case. And also because calls to boycott Red Bull products is growing after the Red Bull heir’s charges were suddenly dropped in Thailand.

Vorayuth Yoovidhya, is the grandson of the late Chaleo Yoovidhya who created the Thai energy drink Red Bull. He was charged after crashing his black Ferrari into a policeman in 2012. Even more he dragging his body of the policeman for dozens of meters before fleeing the accident scene.

Police said on Friday his charges, which included speeding, fatal hit-and-run and reckless driving causing death, were dropped. In a case that has raised questions about crime and punishment for the rich elite in Thailand.

TCP Group, which owns the Thai Red Bull brand, said it is run by Mr. Vorayuth’s uncle. Furthermore its not directly associated with Vorayuth. Mr. Vorayuth father has part ownership in the international Red Bull brand that the grandfather had co-founded with an Austrian partner.


“TCP Group would like to clarify that Mr. Vorayuth Yoovidhya has never assumed any role in the management and daily operations of TCP Group. He was never a shareholder, nor has he held any executive position within TCP Group,” the company said in a statement.

“TCP Group would like to clarify that Mr. Vorayuth Yoovidhya has never assumed any role in the management and daily operations of TCP Group. He was never a shareholder, nor has he held any executive position within TCP Group,” the company said in a statement.

Vorayuth Yoovidhya has never assumed any role in the management and daily operations of TCP Group.

is now distancing itself from the founder’s grandson.